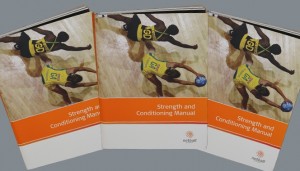 Netball Australia has developed a new Strength and Conditioning resource for netball coaches of all levels who want to develop the physical capacities necessary for improved performance in netball.

The strength and conditioning of netballers is a key component of on-court success not only for the world champion Australian Diamonds but also ANZ Championship franchises, National and local teams.

The resource has been divided into two sections: one section for coaches who want to know the theory and science behind the strength and conditioning of athletes, and the second section full of programs to copy and use. [Read More →]