In the face of some stiff competition this upcoming weekend for the Storm, against the Queensland Fusion, Victoria Fury and the AIS, the NT News published an article about this weekend’s matches at Marrara featuring Storm captain Kat Hollis’ alter-ego. 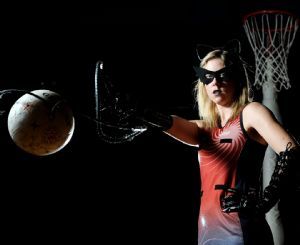 A STORM is brewing at Marrara Indoor Stadium as the Territory prepares to tackle Queensland Fusion in an ANL blockbuster tonight.
The match kicks off a triple-header this weekend with games against defending premiers Victorian Fury tomorrow and AIS on Sunday.
While the draw looks tough on paper, Storm captain Kat Hollis in confident of whipping her opponents into shape.
“We aren’t intimidated at all, I think we have a lot of experience in our team,” she said.
“Without a doubt we always play well at home, we’ve had some really close matches with all of these teams over the past two years and it’s not out of our reach by any stretch of the imagination.

Read more in your NT News.